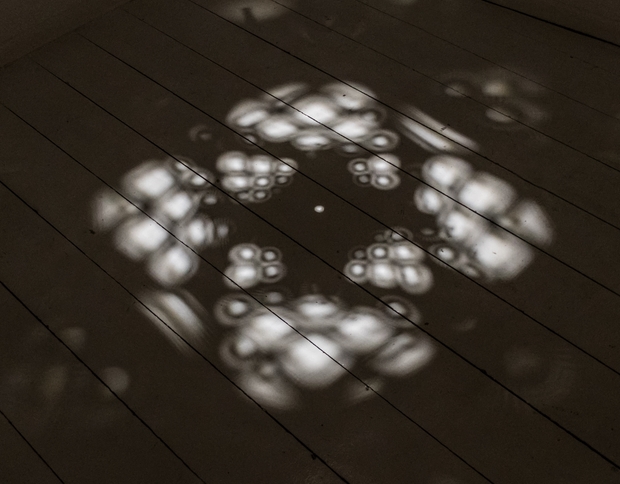 As a multifaceted and diverse person, she moves through Art and Science with ease, investigating the emotional "traces" of spatial experientialism, founded on strictly geometric principles. What she mainly seeks after her work is the abrogation of the partitions between them and the exploitation of the synergies of these categories of knowledge, on the grounds of humanitarian and social implications. This is clearly illustrated in the project of "Odyssey", which achieves the convergence of Geometry with Cognitive Science, while the same pattern is followed both in the projects "Quantum Butterfly" (2018) and "DILEMMAS" (2019).

Pagona Kanellou:
"The human brain perceives reality by visualizing the objects through the sensor of the eye. We do not realize, however, that we actually see only a part of the objects' truth.

The image captured by the eye is that of parallel aspects connected to two or more points, without anyone realizing the real reason for the joints to have been placed there. So, what someone sees is a fluctuation of lines that, as they stray from the field of vision, begin to change forms. And by looking simultaneously at the bright "footprint" on the ground, which is the result of light's journey through the sculpture, wonders even more for the shape that is completely different from what imagined it would be. The same thing happens also in our real life. We choose paths leading to results that we had not predicted wondering why they were chosen.

If, however, we start observing from other levels - above or below or on some side -, we will discover many different perspectives of the same object, while the composed joints will appear to have been placed at that point in rational terms. As a consequence, the cause for the bright "footprint" to have been formed will be "revealed", but now it will be fully attuned to its shape. Therefore, when we address ourselves in observation, we are trained in learning, seeing and processing with clarity all the perspectives of each event and, effectively we are led to a sphere-of-knowledge.

The waveforms created give a different meaning to the discourse through the way of movement and remind of the ratio of movement in sea shells, which is the result of the water's ripple. Thus, the first Light, with the dual parallel waveform of single rotation, indicates the parallel motion, the other Light has a double adverse waveform moving as opposite dipole while, the third Light acquires the tri-polar movement of equal forces. In this way, in human reality, anything that seems chaotic or complicated at first, becomes more understandable, more harmonious and simpler then through the different visual approach. Therefore, at the end, we have the ability to clearly distinguish the rationality of the problem's solution, to recognise the "bright footprint", the pure "Knowledge".

Thanks for sending your message! We'll get back to you shortly.

There was a problem sending your message. Please try again.

Please complete all the fields in the form before sending.